You are here: Home / News / Bit of History 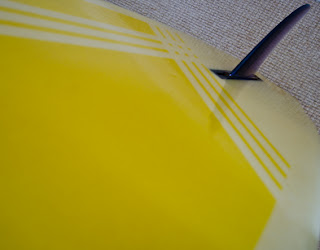 It’s not often that a little bit of surfing history turns up at the surf school but I guess if it was going to happen it would be this week.

The surf and weather have been stupendous for the last week so naturally we have been fairy busy. In theory this week is the busiest of the year – something of a hangover when factories used to close the doors for their two week summer holidays 100 or so years ago.
Anyway, yesterday a chap brings in a 30 year old board that by the looks of it has spent the last 29 &3/4 years in his attic. Better yet it was shaped by British surfing legend Bill Bailey, now sadly deceased. Bilbo, as he was known, was Britain’s first surfboard manufacturer and had the original surf shop in the UK and while the board doesn’t really cut the mustard in terms of todays high performance surfboards as a token of British surfing history it is almost unique.
After a bit of haggling the board is now mine but what to do? Do I surf it as was always intended? Or do I put it up on the wall as a bit of art?
If the board was a battered old dog I reckon I’d be straight out on her but now I’m not so sure. Its looking like she will never see saltwater again.
Am I wrong? Does a board deserve to be used?