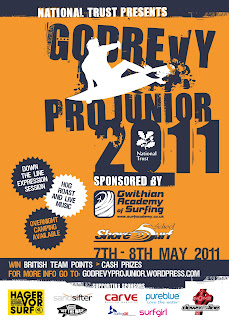 The Godrevy Pro Junior was completed earlier today in obscenely poor conditions. Howling South winds smashing the rights to bits and making the lefts, to my mind, all but un-surfable – but the groms proved me wrong.

They took to it with gusto and I have to single out a young chap called Jobe Harris who tore what remained of the waves to shreds. He won both the Under 16’s and Under 18’s (no mean feat for a 16 year old) and impressed anyone who watched him – except the other competitors of course. He’s got a really mature and powerful style so I reckon he could be one to watch.
He’s off to Peru in mid May with local lad Paddy Daniel to compete for Britain in the World Junior Surfing Games so keep an eye out for them in the coming weeks.
Well done to the National Trust, Robyn Davies and Nick Holden for putting on such a great event. Can’t wait till next year.