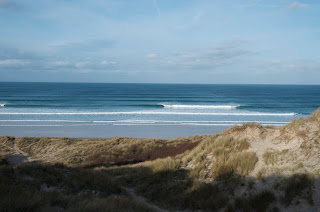 There was I prattling on about how good the weather had been when all of a sudden the heavens opened. Its been a bit damp and stormy for the last couple of weeks to say the least and we have been stuck in a Westerly wind cycle. Westerlies are the ‘pointless’ winds in this part of the world. They just bring rain in the winter and there are no coves where you can shelter unless the swell is so large that you can surf on the English Channel side of the Lizard peninsula. And that don’t never ‘appen!

There has been the odd break in the winds though. Usually when a storm passes overhead you get a few hours respite with light winds, ideally from an easterly direction, like in the above photo. This little beauty was taken a few weeks ago now but it was one hell of a weekend. Swell, good winds and good banks. Its rare to get three of those at the same time in January so to get good weather as well is nothing short of a miracle.
As for the coming weekend its looking like a cold one. Northerly winds and clear skies. Surfing in this weather means its almost impossible to get enough feeling into your hands after a surf to grips your car keys and unlock the doors. Thank God for central locking infra-red key fobs – without them I’d still be in the car park now.