You are here: Home / News / The Next Generation 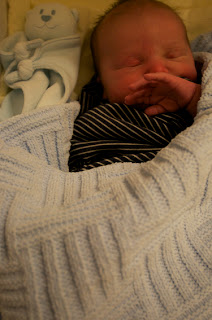 To mark the beginning of what must surely be the best week of weather for the entire winter I did something extraordinary on Tuesday. I witnessed the birth of my son Finn Luke Bear Greenaway who weighed in at a healthy 7 lbs 10. Clearly I haven’t been getting in the waves at all this week and from the screaming I heard earlier its doubtful if I’ll get back in the water for a week or two but for the first time in my life I think I have found something that rivals surfing. I just hope the boy will love surfing as much as I do and we can spend a whole lot of time at the beach.
By pure chance this week coincided with a chap asking if he could bring a four year old for a lesson this summer. Normally we won’t teach anyone under the age of six but it got me thinking how young an age could you begin surfing at. I’ve seen footage of a three year old riding tandem with his father – hell, I’ve even seen a kid barely able to take his own weight surf tandem but in both cases the children were being held in place and didn’t have to actually do anything themselves other than admire the view.
I guess that providing a surf coach or an adult could get the surfboard to knee depth on a very small surf day then it would be safe enough for a four year old to catch a couple of waves and stand up unassisted. I suspect a lot depends on the four year old in question. I also think that if the conditions were anything less than perfect then it could put the child off surfing for life and who wants to risk that?
The funny thing is that any 5 – 7 year old can stand up with almost no assistance whatsoever. They seem to be able to stand on any board and on any wave but they do need help with getting their surfboard out to knee/waist depth water and catching waves.
It’s great to be young, eh?