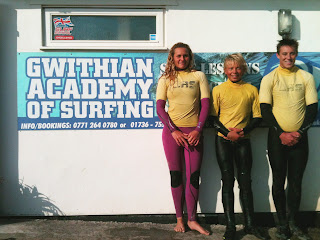 We’re suckers for bleeding heart sob stories here at GAS so when local ripper and surf coach Paddy Daniel rocked up ashen with worry and lacking his usual exuberance we knew that we were about to get guilt-tripped into doing something.
Paddy (far right), and his partners in crime Tassy Swallow, 17, (left) and Harry De Roth, 13, (the other one) are all from the area and have been chosen to surf for Britain against the worlds best surfers in the World Junior Surfing Games in Panama.
‘Hang on a minute, thats not a sob story’, I hear you cry.

Well, if your 17 years old, the current and the previous governments have damned you to a future of serfdom and you have to cough up the £2500 to get there then you realise he may have a point. It’s pretty expensive this ‘surfing for your country’ business isn’t it?
Paddy does have a certain entrepreneurial streak however so he suggested that he might be able to drum up some cash if he offered his alma mater, Penpol Junior School, a surfing lesson.
All he needed was 25 surfboards, a load of wetsuits and a gullible surf school owner.
I’m pleased to say that the lesson was a roaring success and judging by the smiles on the Penpol pupils faces today could be the genesis of the next wave of British Surf Team members.
Well done Pads, Tas and Hazza and good luck in Panama. We’re all rooting for you.